It’s become one of the most liberal legislatures in the country. But these activists weren’t intimidated. 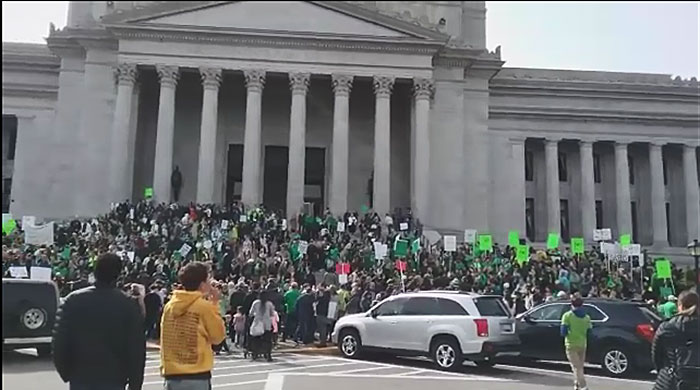 Outside the Washington State Capitol approximately 2000 Christian activists protest the “comprehensive sex-ed” bill. MassResistance supplied them with materials so they could go inside and lobby.Two days later the bill died in committee!

Washington State MassResistance activists helped mobilize groups around the state and worked strategically to successfully stop a hideous Planned Parenthood-backed “comprehensive sex-ed” bill from becoming law – despite its broad support in the Legislature.

Many people are unaware that Washington State has become has become a far-left state, on a par with California and New York. Following last year’s November elections, left-wing Democrats solidified their power in the state capital, Olympia. Like other states that have gotten “bluer,” the government is now pushing abusive, anti-family policies at a rapid pace. This includes the items on the LGBT and Planned Parenthood checklist for the public schools.

Their major bill, SB 5395, was a “comprehensive sex-ed bill.” It was lobbied heavily by both Planned Parenthood – a major donor to Democrat politicians – and the LGBT lobby. The bill included the following:

Parents have noted that even when they take advantage of the often cumbersome “opt-out” provisions, the school climate and culture change for the worse when “comprehensive sex ed” is implemented. (Their children still mingle with students who have learned the harmful information, and some teachers will still be displaying pro-LGBT propaganda for all children to see.)

Getting the fight started

MassResistance activists in Washington State contacted our office throughout the early part of the year. They wanted help with organizing and networking in the state to stop this bill. Their alarm about it was considerable. Fortunately, they refused to sit back, or just resort to phone calls and emails.

The bill started out in the State Senate.

One of the MassResistance tactics was to have people attend strategic local meetings.  The State Senator who sponsored this terrible legislation, Claire Wilson (D-Federal Way), an “out” lesbian, also served on the Federal Way District School Board’ (Federal Way is about 30 minutes from Olympia.) On Feb. 26, over a hundred people came to the Federal Way School Board meeting to express their outrage about this bill. The outpouring that evening was so intense that after the meeting Senator Wilson resigned from the School Board! 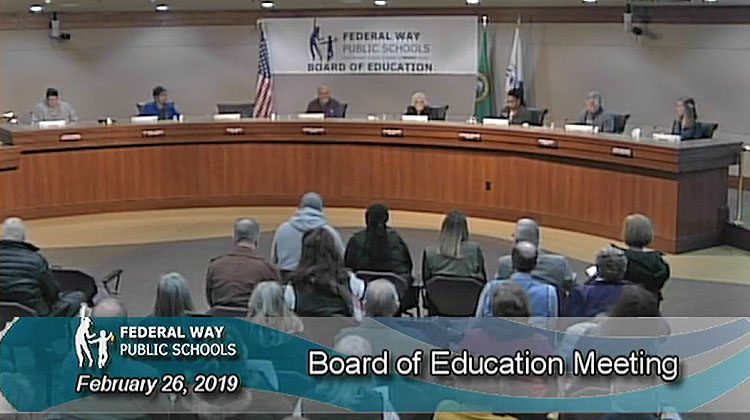 Activists filled the Board of Education meeting! 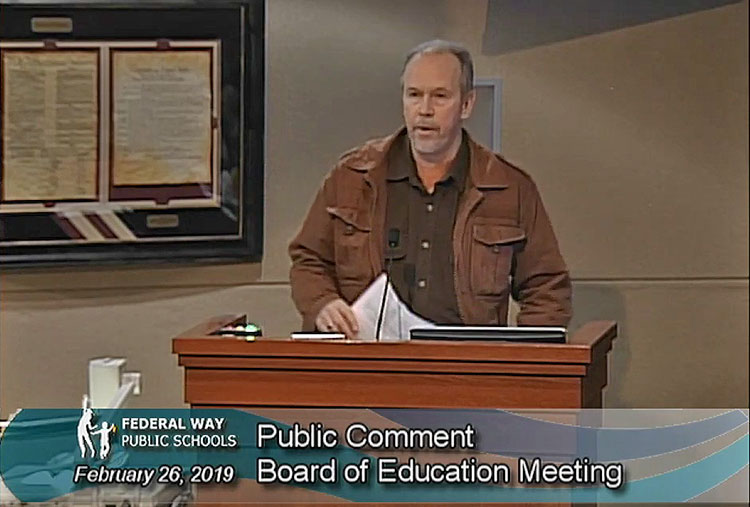 This father didn’t hold back. He compared the effects of comprehensive sex-ed on children to the horrors of the Chinese communists. 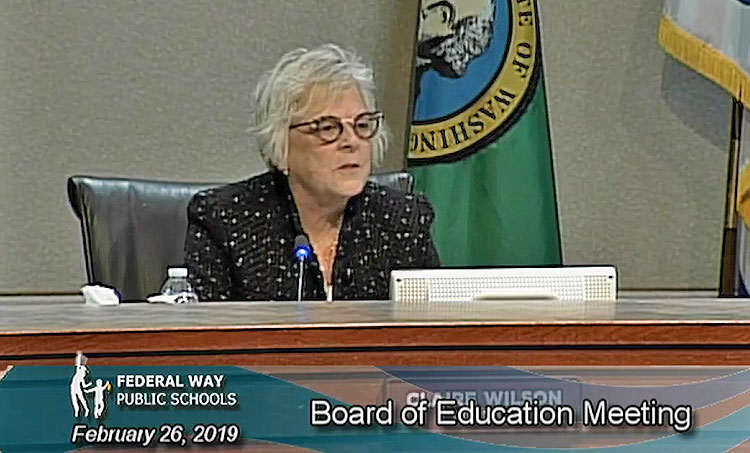 State Sen. Claire Wilson, also a School Board Member, took so much heat that night that she resigned from the Board after the meeting.

Already, elected officials were feeling the heat! MassResistance activists then contacted the State Senators repeatedly. It was an uphill battle, but necessary and effective.

On Feb. 27, Bill SB 5395 passed the Senate, but on a narrower margin than expected, 28-21. This also indicated that it would face rougher currents in the State House of Representatives.

In the House, the first stop was the Education Committee. Working with other local activists, MassResistance identified which members, mostly Republicans, would likely vote against this legislation. But they also identified the Democratic members in swing districts who would most likely fear a voter backlash if they supported this comprehensive sex-ed bill. They focused particularly on them.

In addition, MassResistance activists and others protested inside and outside the state legislature. Non-stop calling and emailing followed. Over the next several weeks, hundreds of people emailed and called both their own State Representatives and the MassResistance list of Education Committee members. 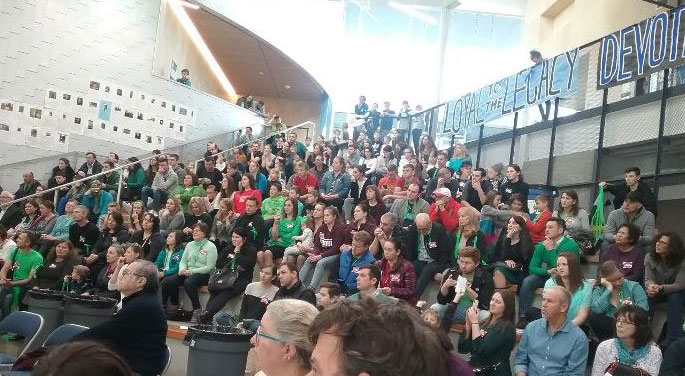 The meeting was held in the high school cafeteria. Hanging from the ceiling was a huge rainbow flag. That only served to anger the parents. 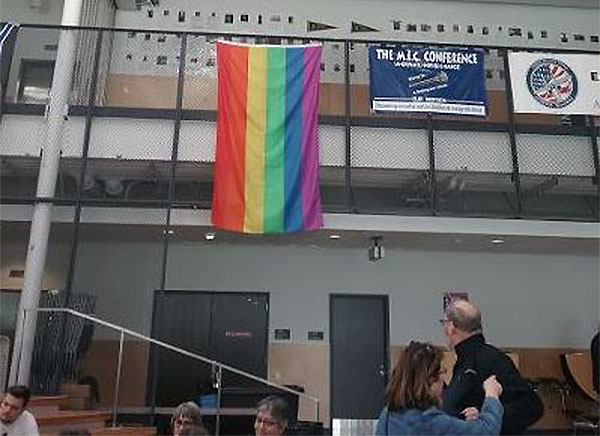 This is the last thing that the parents wanted to see being displayed at the high school.

At the meeting, the legislators refused to talk about the comprehensive sexuality education bill until a pastor yelled, “You know what we are here for!” and the crowd stated chanting. At that point the legislators had to open the floor to 45 minutes of public comments. People were already furious over the HIV and sexuality education currently in the local schools. It teaches children about homosexual, sex but is devoid of any conservative or Christian values.

The bill dies in the House Education Committee!

April 3, 2019 was the statutory deadline to advance any policy-oriented legislation in the Washington State Legislature. As that date approached, the House Education Committee was feeling heat from all sides. The targeted “progressive” committee members were getting nervous about the angry phone calls and emails they were getting. And rumors were spreading that the House Speaker was getting tired of complaints about this bill from other House members.

On March 27, the Chairman of the House Education Committee, Rep. Sharon Santos, started to cave in on Bill SB 5395. During a speech before a local group, she complained that she had been left out of the “process” when the bill was written and introduced. Even though she thoroughly agreed with key parts of it, and certainly with LGBT inclusion, she was feeling the uneasiness of the committee members. And she was troubled by the rumors that if she made the Education Committee vote on it and pass it, the Speaker wouldn’t bring it up on the floor. 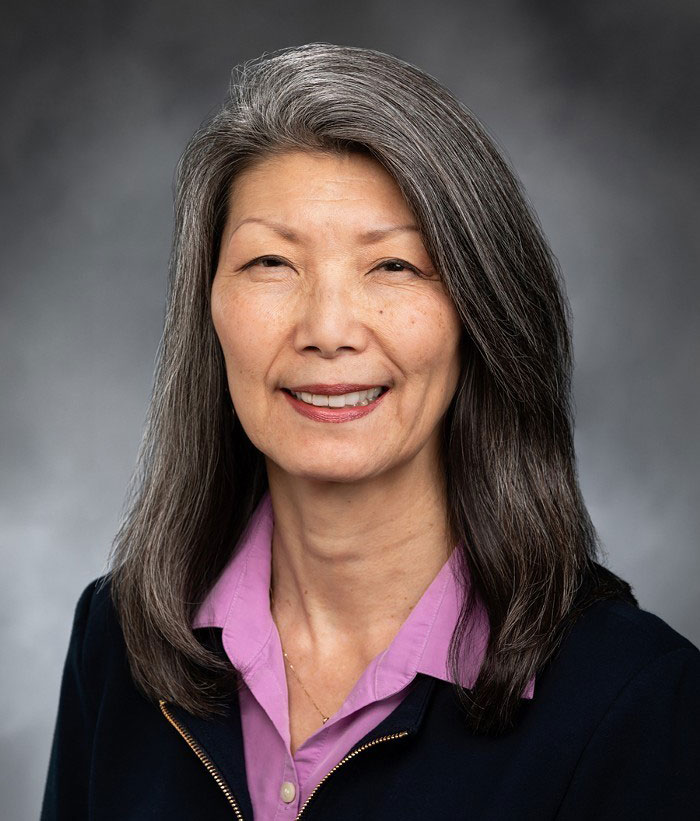 Rep. Sharon Santos, chairman of the House Education Committee, ultimately backed down and let the bill die. So she had to come up with some good excuses for her Planned Parenthood supporters.

Rally outside of the Capitol. On April 1, approximately 2,000 Christian activists gathered on the steps of the Capitol building for a prayer rally on SB 5395. A Washington State MassResistance activist supplied them with “Stop 5395” legislation forms to use inside for personal lobbying. That made a big difference. 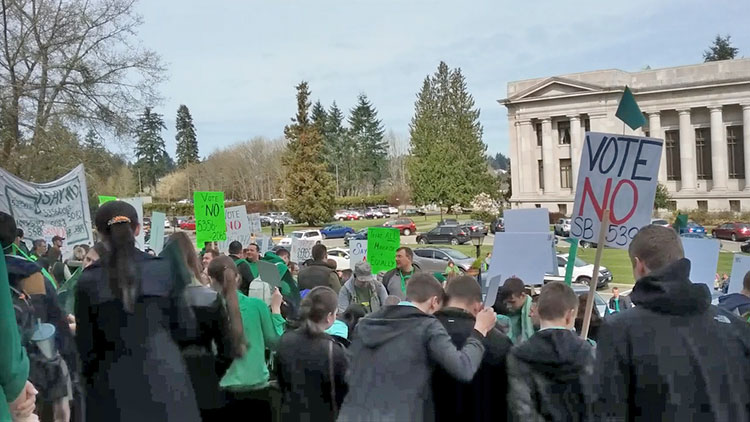 The Christian activists outside the Capitol.

Two days later, the April 3 deadline passed without the House Education Committee bringing SB 5395 forward for a vote! This was a huge victory. Legislative staffers in the state legislature confirmed that Washington State House Reps did not even want to vote on the bill.

Thousands of Washington State citizens, with help from MassResistance, made it very clear that they abundantly opposed this terrible bill. When politicians fear the wrath of the voters, but don’t want to disappoint their leftist special interest donors, the voters generally come out on top. The special interests had to settle for excuses.

What This Victory Means

Most pro-family movements believe that they have little chance of success in liberal states with large Democratic majorities. In contrast, MassResistance informs and trains its activists to confront lawmakers across the political spectrum, regardless of their party. And our tactics work.

Armed with facts, while refusing to rely on weak but comfortable arguments, MassResistance strikes at the core problems associated with LGBT behaviors and the sexual promiscuity associated with it. Even liberal lawmakers know that they must face the voters on Election Day. When enough voters pound their representatives, their leadership will find a way to quietly kill or table bad bills. This is the kind of confrontational, pro-family activism that works!

Our Washington State MassResistance activists will be keeping a close watch on state legislation, since a similar sex-ed bill will likely up next year – or be attached to some existing current legislation. For now, they can rest in the knowledge that they have made a big difference in one of the bluest, most pro-LGBT states in the country.

Please help us continue to do our uncompromising work!

Your support will make the difference!

Arthur Christopher Schaper is a blogger, writer, and commentator on topics both timeless and timely; political, cultural, and eternal. A life-long Southern California resident, Arthur currently lives in Torrance. Follow his blogs at The State of the Union and As He Is, So Are We Ministries. Townhall.com Contributor Barbwire.com Contributor Canada Free Press Contributor Twitter: @ArthurCSchaper Email: ArthurSchaper@hotmail.com View all posts by Arthur Schaper