Parents stand up to Antifa assaults – while protesting “Drag” and transgenderism for children.

Heavy police presence – but no arrests of Antifa perpetrators. 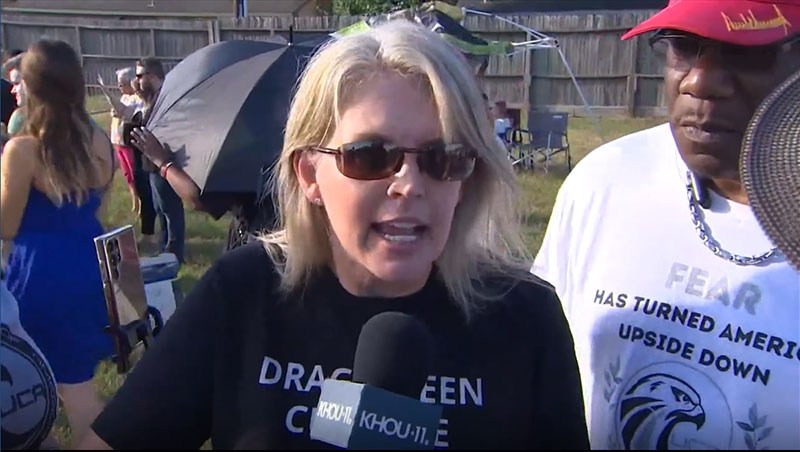 Texas MassResistance leader Tracy Shannon talks to TV reporter during protest. She didn’t hold back about “Drag” and Antifa.

We’re all learning how the Left’s storm troopers are not only violent but degenerate. They come out in force to defend those who push sexual deviancy on children – and attack anyone who disagrees.

But in Texas, pro-family activists – including MassResistance – are boldly standing up to it!

As we recently reported, Texas MassResistance leader Tracy Shannon and MassResistance activist Kevin Whitt exposed how a local leftist church in Katy, Texas, was bringing in a Drag Queen with a criminal record to perform at an upcoming event with children. This was widely reported on conservative news sites, and several pro-family groups announced they would be showing up there to protest as the Sept. 23 event was taking place.

The church, First Christian Church of Katy, had quickly dropped that particular Drag Queen after Tracy exposed his past and published his degenerate social media posts. But the church continued to advertise the event with a different Drag Queen.

Besides pushing “Drag” culture on children, the purpose of the church’s “Drag Bingo” event was to raise money for “Transparent Closet,” the church’s in-house organization that helps teenagers to cross-dress without their parent’s knowledge. For example, the group gives dresses and make-up to boys, and gives girls strappings to “bind” their breasts tight to appear masculine – a very unhealthy practice promoted by the LGBT movement.

One pro-family man managed to get an admission ticket to the church’s Drag show. While inside, he also was given a tour of the “Transparent Closet” by a church member! But when they saw that he was videoing, they had a police officer remove him. Someone later posted his video on Twitter. Right after he left the church, Tracy Shannon interviewed him.

Pro-family activist talks to Tracy after getting ejected from the church ‘Drag’ event.

He told Tracy that the Drag show was just as bad as people imagined it would be:

It was a drag show. And there were kids and other adults giving the drag queen money during the performance. There were suggestive things said, all of that. There were adults, younger children, and teenaged kids.

He then described what he saw in the “Transparent Closet” area:

The closet is set up in a way that is designed to keep parents uninformed. Chest binders, underwear, and bras can be found.

They told me that they’re trying to get more binders and things like that. They showed me jewelry, purses, makeup, bracelets, earrings, underwear, and scarves.

They said they give Home Goods bags to the kids to take it all home secretly, “because families aren’t supporting.” 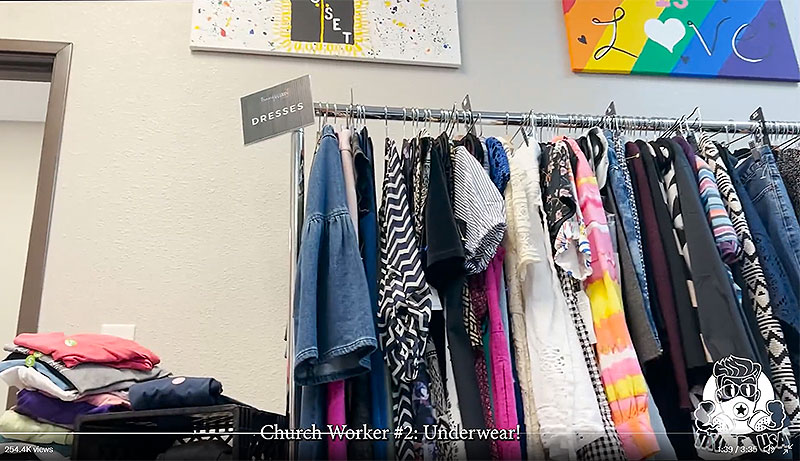 This clip from pro-family activist’s video shows a rack of dresses for boys in the church’s “Transparent Closet” area.

He also mentioned that these repulsive buttons were being given out at the church event.

On Saturday, Sept. 23, 0ver 200 people from several area pro-family groups – including Texas MassResistance – lined up across the street from the church to protest the event.

Many held signs. Some prayed and sang. A Catholic group prayed the Rosary. A contingent of “Proud Boys” (who are much maligned in the media) showed up in support. The peaceful protesters came because they were upset that this was targeting children in their city.

The pro-family protest stretched for blocks. 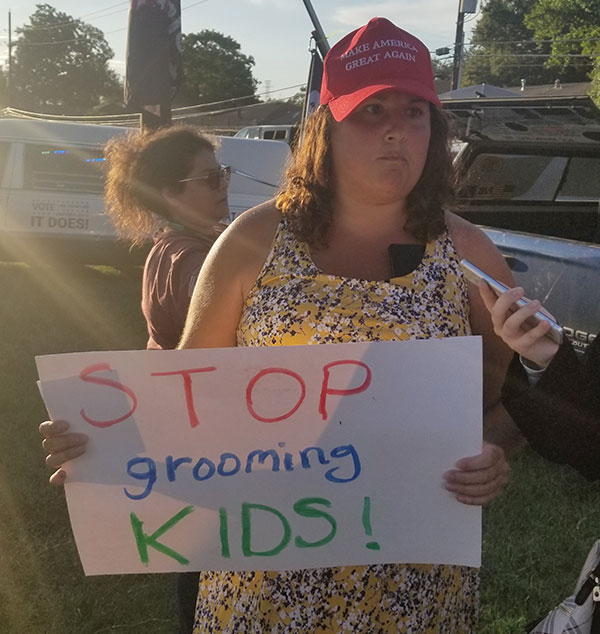 People weren’t afraid to speak out! 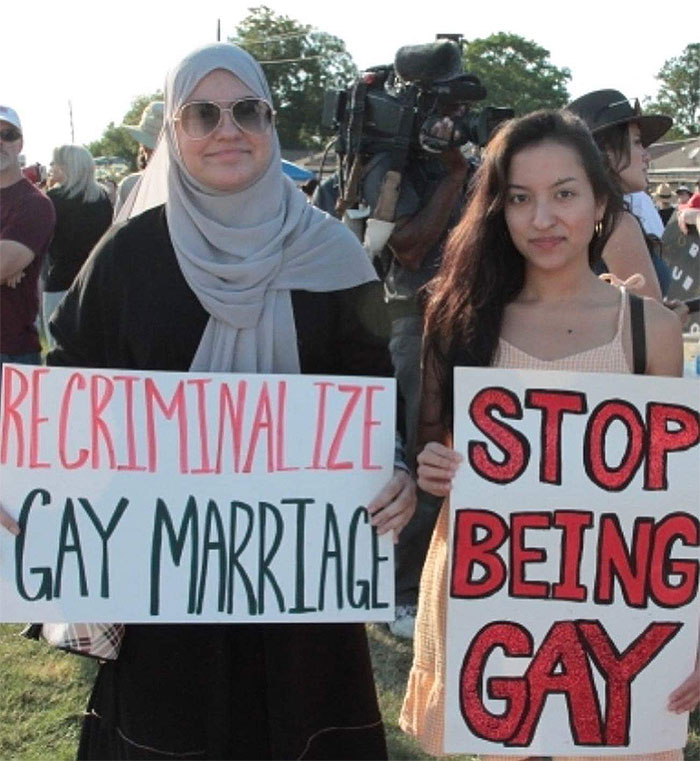 It was a diverse crowd! When they found out that Antifa was coming, they had messages for them! 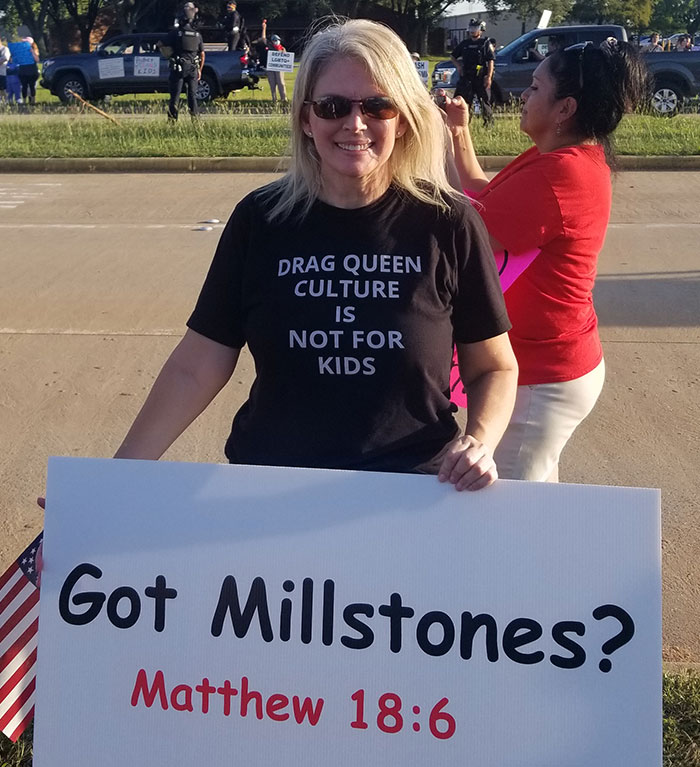 Tracy Shannon had a T-shirt for the event along with her sign.

A group of several dozen Antifa thugs clearly had been organized to disrupt the pro-family protest. They lined up on the sidewalk in front of the church, facing the pro-family people across the street.

Many of them were masked and dressed entirely in black or wearing other bizarre clothes. They brought signs promoting homosexual and transgender behaviors (and child grooming), and, as usual, labeling those who disagree with them as “fascists.” (This is ironic, of course, because they are acting exactly as the true fascists of the 1930s.) 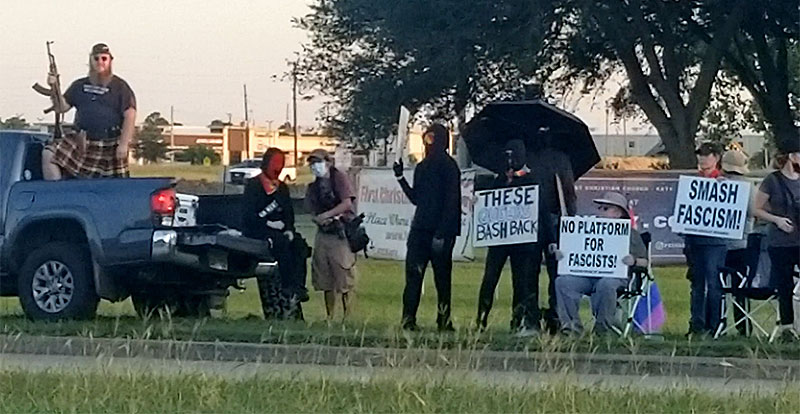 The Antifa crowd and their childish signs. Note the man on the truck wearing a kilt (or skirt?) and holding a rifle. (No one was intimidated by that.) 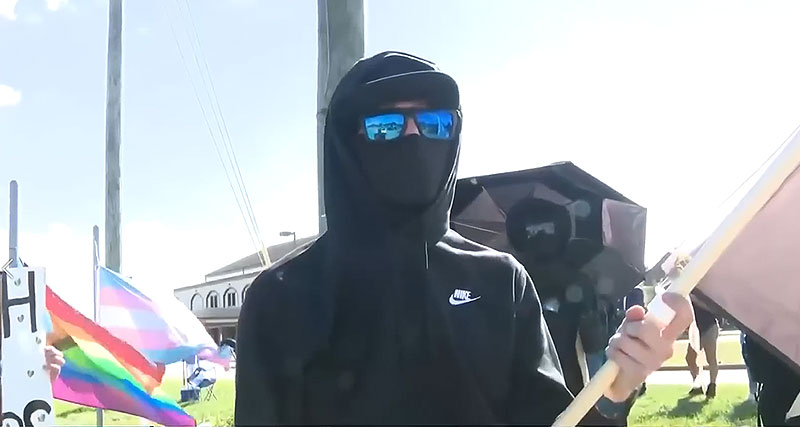 In front of the church. 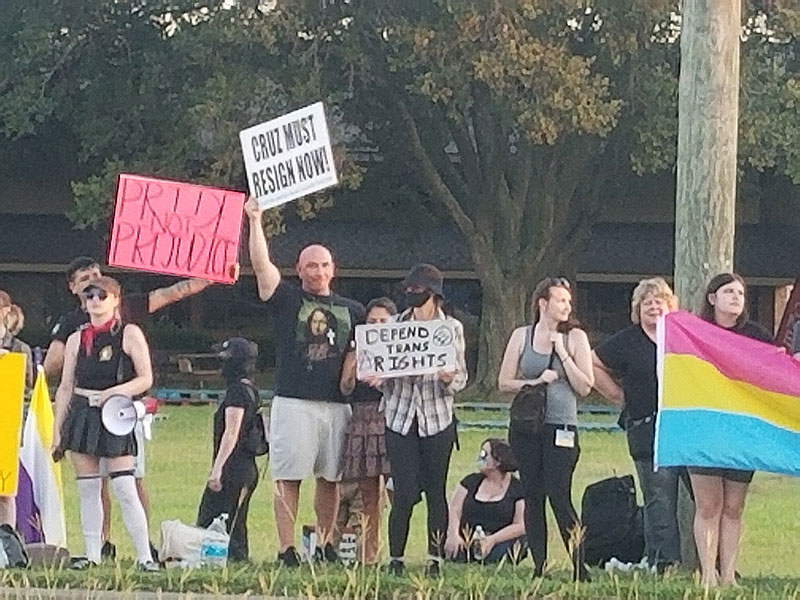 Next to the church parking lot. Afraid to show their faces.

Word of Antifa’s plans had apparently become known to the police, who showed up in riot gear to attempt to act as a barrier between Antifa and the pro-family people.

There appeared to be both local cops (above) and state police (below) on the scene.

The overwhelming opinion of the local people in Katy, TX was clearly against the Drag Queen event with children. Nearly all of the counter-protesters (supporting the event) seemed to be part of the Antifa group, and from outside of the community. All of the cars that passed by that honked or gestured supported the pro-family side. (A lot of thumbs-up!) The Antifa group appeared to be discouraged by that response, Tracy told us.

Antifa sprayed everyone with Bear Mace because they are idiots. They were intending to spray the Proud Boys but it was windy. The Mace blew down the street and affected most of the crowd.

There was also a drive-by by Macing of the Catholics who were praying Rosary. My son was Maced. The Mace got in all our throats. One woman had a panic attack, another had to administer an EpiPen because of allergic reaction to the Mace. 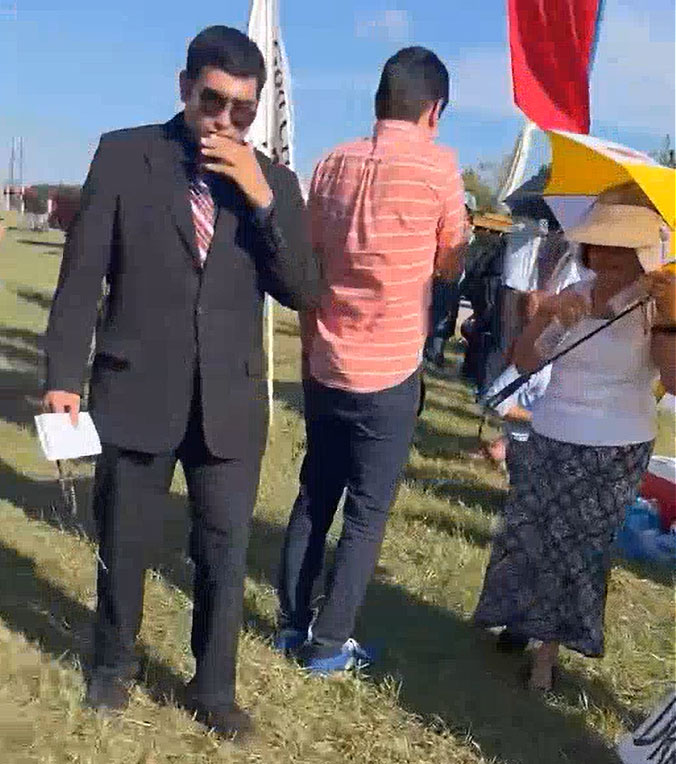 The group of Catholics reacts after being sprayed with Bear Mace.

The police saw what was happening but made no arrest of the thugs. They did not seem to want to get involved beyond keeping people apart. It was outrageous, and very frustrating.

Were there actual Nazis among pro-family groups?

There were some strange people on the pro-family side that the Antifa people insisted were “Nazis.” But this was likely a false-flag stunt similar to what we’ve seen the Left do many times before. As Tracy told us:

They kept pointing out that “Nazis” were on our side. So, I yelled at them that “we didn’t invite Nazis, but you invited drag queens for children.” Not sure if the weird men standing here were real Nazis or not, but they have shown up before, but only when Antifa is there. So they are either plants (most likely) or they are more interested in Antifa than protecting children.

Although the church event itself could not be stopped, the fact that over 200 pro-family people came and stood up to the intimidation tactics of Antifa is significant. People working to sexualize children should never get a free ride. And prominent conservative media across the country reported and commented on this action.

Besides being violent, Antifa is more degenerate than many people realize. Like the Nazis of the 1930s and the Leninists before that, they recruit dysfunctional people from the dregs of society and form them into a nationwide terror group. They are clearly well funded and well organized. In this case, much of their funding (as we know) comes from US corporations that give hundreds of millions through a variety of disgusting leftist “social justice” front groups.

But good people must continue to stand up – and we will eventually bring back decency and a healthy society!

Please help us continue to do our uncompromising work!

Your support will make the difference!

Arthur Christopher Schaper is a blogger, writer, and commentator on topics both timeless and timely; political, cultural, and eternal. A life-long Southern California resident, Arthur currently lives in Torrance. Follow his blogs at The State of the Union and As He Is, So Are We Ministries. Townhall.com Contributor Barbwire.com Contributor Canada Free Press Contributor Twitter: @ArthurCSchaper Email: ArthurSchaper@hotmail.com View all posts by Arthur Schaper